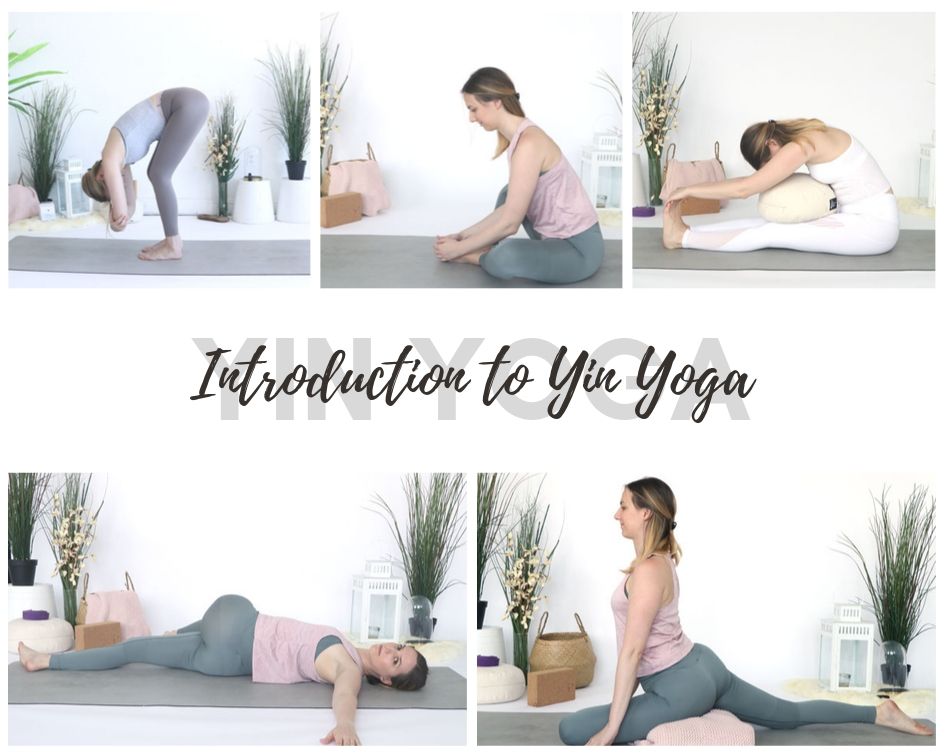 In the western modern world, “yoga” has come to refer to Hatha yoga, or yoga for exercise, consisting largely of postures called asanas. Though many have a distinct image that comes to mind when they think of yoga, the practice is an ancient activity dating back to the sixth and fifth centuries BCE. Yoga has many disciplines and variations, one of which is Yin Yoga.

What is Yin Yoga?

Yin Yoga is a slower-paced style of yoga that still utilizes asanas to promote exercise. The difference is that the Yin asanas are held for longer than typical yoga poses: usually between 2 seconds and 3 minutes but sometimes as long as 5 minutes or more.

This type of yoga focuses on applying moderate stress to the connective tissues in the body, such as tendons and ligaments, to increase joint circulation and improve flexibility.

The slower pace and longer poses encourage a more meditative approach to yoga with inner silence, peace, patience, and contemplation.

A Brief History of Yin Yoga

Modern Yin yoga was introduced to the western hemisphere in the late 1970s with martial arts expert, Paulie Zink. Zink was an accomplished Kung Fu artist and competitor, noted for his exceptional flexibility. He attributed his success in part to studying Taoist yoga with a master from Hong Kong named Cho Chat Ling.

Zink began to teach a blend of Hatha and Taoist yoga, going on to develop asanas and movements himself to add to this new discipline.

Yin yoga strives to stimulate particular meridians, or energy channels, of the body according to traditional Chinese medicine. During classes, while students hold yin asanas, teachers often give informal monologues including explanations of the anatomy and physiology of the poses, Buddhist stories, poetry, songs, and personal reflections.

Yin and yang represent complementary and opposite principles in nature based on Taoist concepts. Here are a few ideas related to Yin and Yang, respectively:

Pliable blood and muscles in the body align with Yang, with warmth and movement, whereas stiff connective tissues follow along with Yin. This is why Yin yoga provides more of a focus on connective tissues like ligaments and tendons.

Poses in Yin yoga may look similar to those in the more active Hatha discipline, and some are almost identical. Yet these poses are often given different names to remind practitioners that the focus and execution of the poses are different in Yin yoga.

Here are some of the basic, beginner Yin yoga poses. Try to hold poses for 2 to 3 minutes, but discontinue a pose if you feel any pain. 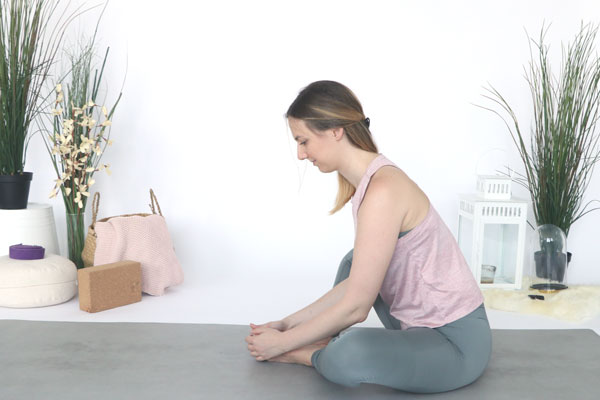 Take a seated position. Bend your knees, placing the bottoms of your feet together. Lean forward until you feel a comfortable stretch. As flexibility improves, advanced practitioners, can rest their foreheads on their feet.

Take caution with back issues like a herniated disc or sciatica, as this pose could aggravate the condition. If you have experienced neck injury, you may need to rest your head on a support. 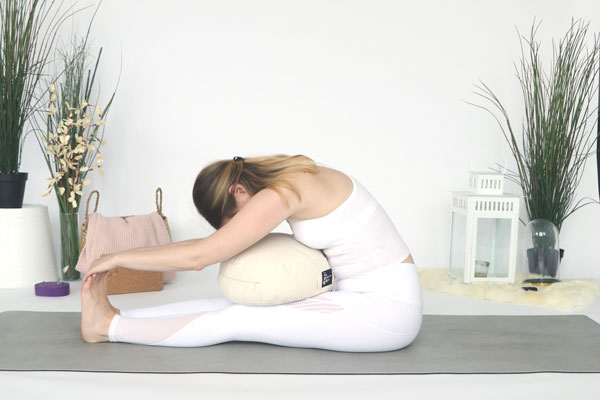 Sit with your legs straight out in front of you. Bend forward at the waist and let your head hang. If you feel severe tightness in your hamstrings, try a small cushion under your knees.

The Caterpillar pose decompresses the spine and targets the hamstrings and thoracolumbar fascia. This pose targets the Urinary Bladder Channel, related to the water element. Caterpillar is intended to enhance introspection, calming, and soothing.

Take caution with back issues like a herniated disc or sciatica, as this pose could aggravate the condition. If suffering from overly tight back or hamstrings, lay with hips close to a wall to alleviate stress or try sitting on a cushion to change the angle of the pelvis. 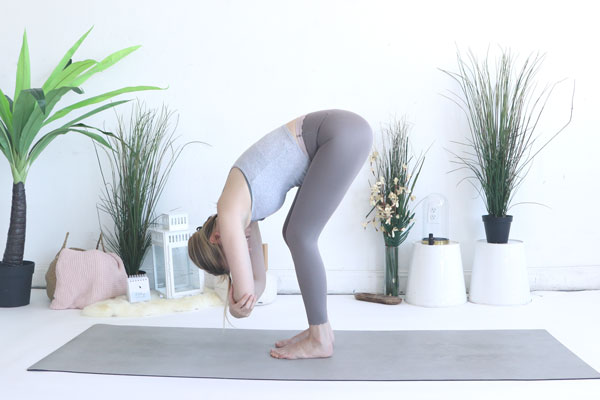 Begin from a standing position with your feet the same distance apart as your hips. Bend your knees slightly and bend forward at the waist. Hold onto opposite elbows with your hands and let your arms and head hang.

This pose decompresses the spine, targeting the hamstrings and thoracolumbar fascia. Dandling pose is intended to target the Urinary Bladder Channel, associated with the water element, and to stimulate the mind via blood flow to the head.

Avoid this pose if you have high or low blood pressure or are in the later stages of pregnancy. If your hamstrings are too tight, you can keep your knees slightly bent. 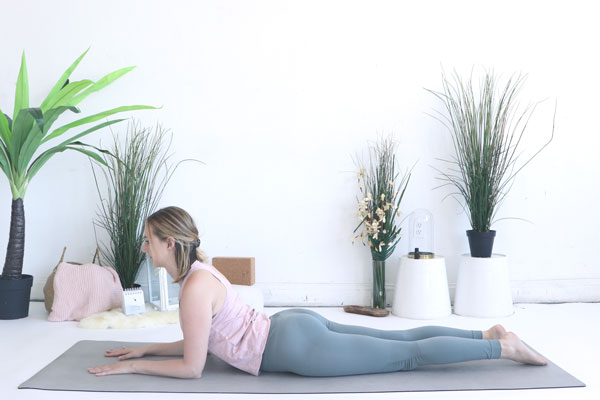 Start by lying on your stomach, then prop your upper body up by resting your forearms on the ground. Look straight ahead, shoulders back and down, with your elbows slightly in front of your shoulders.

The Sphinx pose allows very moderate compression of the lower spine. The pose targets the Urinary Bladder channel, related to the water element. This pose is intended to energize and restore the mind.

Be mindful of any lower back issues or injuries. Resting your elbows on a slightly elevated hard cushion will allow more stimulation. 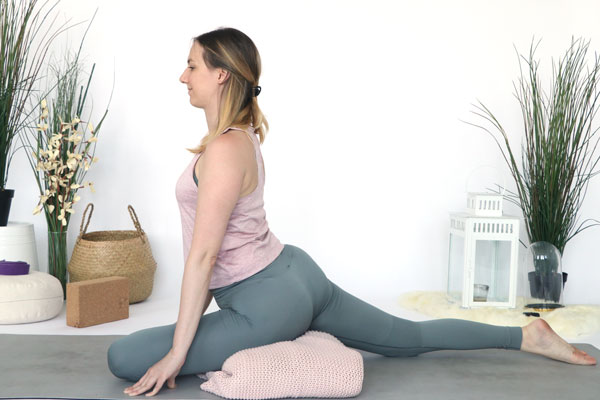 Start with the butterfly pose, then bring one leg behind you and straighten it. The top of your back foot should be resting on the ground. You can either remain upright or lean forward as much as is comfortable; some will be able to lay their upper bodies on the floor. Be sure to repeat for both legs.

Be cautious in the case of any knee or leg injuries on the front leg. If you find yourself leaning over to one side, consider using a rolled-up blanket under your hip to provide stability. If your hands cannot comfortably reach the ground, use a block. 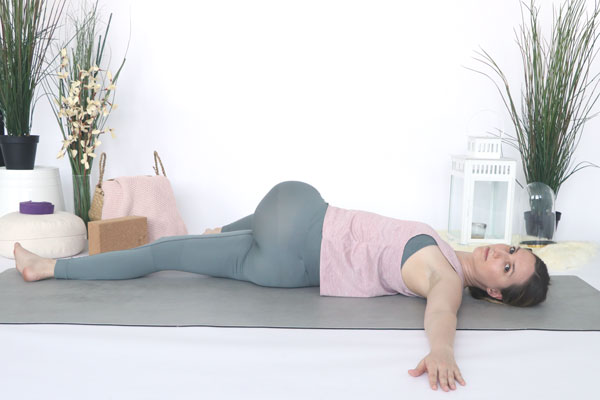 Laying on your back with your body straight, bend one knee into your chest and cross it over your torso. Rotate your hips while keeping both shoulders on the ground. If your knee does not touch the ground, use a folded blanket underneath. Place the hands behind the head. Make sure to pose with both legs.

The rotation of the spine in the twisted roots pose is intended to release tension. It also stimulates the obliques, glutes, and IT band. The twisted pose targets the Gall Bladder channel, related to the wood element. The Heart-Lungs pathway, relating to the fire and metal elements, is stimulated by the raised arms. Twisted roots should target calming, relaxing, and balancing.

Take caution in instances of hernia or prolapsed discs. Support the knee if it does not reach the ground naturally. If you feel any numbness in the hands or fingers, lower your arms.

Whether you’re completely new to the practice of yoga or you’re just looking to branch out, Yin yoga is a relatively easy and relaxing way to practice some self-care for both the mind and body.

Have you tried Ayurvedic Skin care? My two favorit

How to use a yoga strap? We continue our series on

Doing yoga every day can be hard. However, yoga ca

A yoga block is by far my favorite #yogaprop The g

🔥 Breath of Fire is my favorite breathing exerc

I am starting a new #yogareels series today: How t

Did you know that you can use your breath to impac